Bands beginning with the letter "B" today.

Why? because I was going to post a picture of my breakfast this morning and discourse on the lack of conversation over the fry-up plate, but then I remembered I'd done a breakfast picture not that long ago. So instead, we get these cute little fellas - souvenirs from a visit to Spain a few years ago, and potential cover stars - and one track that is nothing much about breakfast, and another that is nothing much about conversation. Or then again.

Also caught Jeff Green's The Green Side of Life on BBC Radio 2, which was an amusing compilation of loads of great comic clips - this week on the theme of co-habitation, which basically was an excuse for half an hour of wonderful comic turns on the war between the sexes.... It's all about conversation apparently - women live for it, men abhor it.

You can listen to the show here, or else, some more B... comedy:

A stroll in the surreal sunset

I like the situationists' random walk or "Dérive" when I come to find new music, rather than following the latest fad or the reviewers' hot new thing for this week, day, hour... Although it's not entirely random (my personal psychogeography being far too organised and analyticial), I'm often attracted by an obscure article here, a snippet of sound there, a boot sale bargain and of course the discount racks of my local music stores.

Yesterday I managed to find some nice things whilst out round the shops - a 1960s live set by the original Ramsey Lewis Trio for one pound, and the 2CD set of the Who Live at the Isle of White in 1970 for £3.

I also found cheap the 1969 Karen Dalton album and DVD 'It's So Hard to Tell Who's Going to Love You the Best' I'd been after for a while, and for another pound a CD by the great folk guitarist Bert Jansch from 2002 'Edge of a Dream' with a variety of well known folk assisting (Bernard Butler, Hope Sandoval), and which to my surprise wasn't the load of old-codger-propped-up-by-uninspired-young-wannabes that I was foolishly anticipating but was actually quite superb, and one of the best CDs I've heard in a while. Good to hear Pentangle getting more of the appreciation they undoubtedly deserve too! Highly recommended!

Anyway, two tasters, one from each:

A band who apparently take their influence from the cult folk-horror film the Wicker Man. Each to their own, I say.

They sound pretty good for an indie band, up there with the Field Music by my reckoning, and their new album is a bit of a cracker.

Two tracks as tasters for the new album 'Everything Last Winter', due out on April 2nd:

Some small successes today. After he-who-shall-remain-nameless left the bath running and almost flooded the kitchen-which-lies-beneath, a plumber came round and confirmed our bath sealant has gone to pot and needs replacing, which will be this weekend's DIY job for the-man-who-does-not-do-DIY. Could be, erm, 'surprising'.

The plumber also told me how to fix the-cold-tap-that-has-refused-to-gush-cold-water-for-nine-months. Bless him ! Another potential DIY-disaster in the making...

Hence, 'The death' seemed vaguely appropriate. And it's a great song! 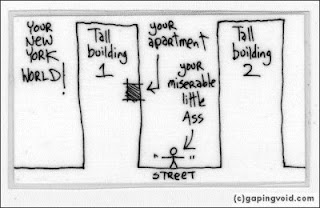 That last White Stripes mash up was so popular I thought I'd post another one, which is just as much fun:

Your New York cartoon thanks to Hugh @ gapingvoid

Went to see Richard Swift play in Brighton last night but the gig was cancelled because the useless venue managed to double-book the room. Odd then, that as I was wandering around my local supermarket this morning, RS's beautiful heart started playing over the in-store music.

Some God is trying to tell me something but I don't know what it is. (I think I want someone to make me a t-shirt saying that!)

Back in June 1970 Joe Boyd was wondering how to turn the genius that was Nick Drake into a marketable star. As a taster to see if other artists might record some of Nick's songs, he got Elton John into the studio at Sound Techniques in Chelsea to record a variety of his whitchseason stable artists' songs, including a couple of John and Beverley Martin songs from their Stormbringer album and four by Nick Drake, all from his first album, 1969's Five Leaves Left.

The Elton session included Linda Peters (later Linda Thompson) on backing vocals, Dee Murray on bass, Ray Cooper on percussion, Nigel Olsson on drums and Davey Johnstone on guitar. The sound is similar to the Tumbleweed folk-rock soul Elton was recording at that time.

Three of the Nick Drake covers have been available on nickdrake.net for a while, and the fourth (saturday sun) is now available here.

Fanfara, Brighton's only Romanian gypsy band were out playing in the North laine today. I last saw them at the Hanover festival, where they led the parade. The music is all brass and percussion, middle-European folk music, a kind of Kleizma. 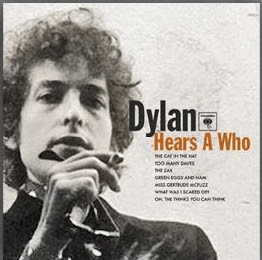 This is incredible. No idea where it has come from, but it's absolutely wonderful!
Bob Dylan sings the words of Dr Seuss....
dylanhearsawho.com