Three songs for the Tim(e)s

and a breakfast for Terry 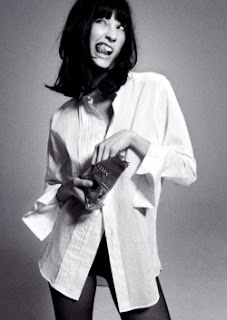 and then there's the slightly unambitious cover by the gorgeous Mareva Galanter (left), former Miss France, who was born in Tahiti. See it all fits!

and this is the original:

For Nick Drake completists only

I've had these tracks for a while now and thought it would be worth
making them available in one place. They really are for completists
only.

Nick Drake didn't play much in front of others, and didn't play with others much, concentrating on recording his own songs and a few select folk-blues covers. Somehow, however, his arranger and friend Robert Kirby managed to entice him to play as guitarist on a couple of sessions, one recording some children's songs for an educational record called Interplay One (1971) with the folk singer Vivian Fowler, and the other on the decent folk-rock LP 'Dark and Devil Waters' (1972) by Mick Audsley (now a much in demand film editor in the UK). There's very little Nick in these tracks it seems, but take a listen and see what you think...

Ewe and lamb by Southcoasting

A day out at the farm in the sunshine was a relaxing thing to do.