...a funny little town on the south coast that seems to be in some sort of time warp. There are no real chain stores or replicant high street shops, each one seems pretty independent and individual. And most of the shops seem to have retained their original storefronts. It's quaint and kind of wonderful. 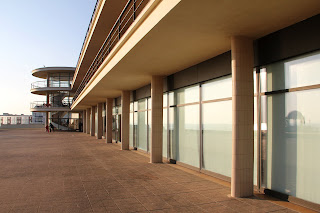 There is also an indoor market, some good second-hand record and book shops, and more charity shops per square mile than most towns I've seen.

And of course the De La Warr Pavillion gallery on the sea front. What's not to like?

The Goons also liked Bexhill, Spike Milligan having been stationed there during World War Two. They based their wonderful skit The Dreaded Batter Pudding Hurler (of Bexhill on Sea) on the town.
First broadcast in 1954. You can listen to it here:

The Met office provides some useful statistics showing weather trends across the UK, and that show that the snowfalls in recent years have not really been extrordinary, and the general trend is still very much one suggesting global warming.
Here's a chart showing the average annual temperature in the UK in winter, for every year since 1910 - and although there's been a slight dip recently the trend since the extreme cold winter in 1963 has been upward.

This analysis was helpfully prompted by a nice piece today on the Full Fact fact-checkers blog, titled 'Is the latest weather of snow consequence?' - well worth a glance, as is their blog generally.
...and here's a strange song to sing in Mumbai, but beautiful nonetheless. "Desperation is the raw material of drastic change. Only those who can leave behind everything they have ever believed in can hope to escape."

"The aim of education is the knowledge, not of facts, but of values."

"The face of evil is always the face of total need."

"Most of the trouble in this world has been caused by folks who can't mind their own business, because they have no business of their own to mind"

"The only possible ethic is to do what one wants to do."